Sant Kartar Singh Jee Khalsa was born in 1932 AD to Mata Labh Kaur & Jathedar Chanda Singh Jee V. Purane Poore Tehsil Kasoor Dist. Lahore it is now in Dist. Amritsar. Jathedar Chanda Singh was a great Gursikh of high morals and good discipline. Sant Kartar Singh Jee was first educated at the Government Middle School Khemharan 9th & 10th grade were studied at National High School – Bhikhivind after which further studies were made at Khalsa College Amritsar. Along with worldly education Sant Kartar Singh Jee was educated in Gurmat by Baba Baga Singh Jee who lived in their village. With the grace of Guru Jee he quickly learnt his 5 morning prayers Reharas Kirtan Sohela off by heart. They were still a student when in 1948 AD they took Amrit at Bhindra from Sant Gurbachan Singh Jee’s Jatha who were at Bhindra at the time. After taking Amrit they became very close with Sant Gurbachan Singh Jee. they were cremated on 21 August 1977.

Whilst studying at Khalsa College they used to remain engrossed in Simran and prayers. They used to recite a lot of Gurbani over and above the compulsory Nitnem for Sikhs. His Anand Karaj was performed in 1950 at the age of 18 years. Two sons were born who are Shaheed Bhai Amrik Singh Jee and Bhai ManJeet Singh Jee. With the permission of Khalsa Jee and to fulfil his father’s desire Sant Kartar Singh Jee became a Patvari (village level revenue official who keeps records of land holdings crop surveys and calculates land revenue) for a while but in 1957 AD he resigned from his job and started living in the Jatha on a permanent basis. For some time they did the seva of being a Garveye (similar to personal assistant) to Khalsa Jee. Daily they would recite the 5 morning prayers Jaitsri Di Var Satte Balvade di Vaar 25 Ang of Sri Guru Granth Sahib Jee and in the evening they would recite the Panj Granthi both Bareh Maha and many Japjee Sahib’s in Khalsa Jee’s presence. They were dedicated in their seva and would willingly do any seva.

He used to remain engrossed in Simran and Gursikhi Parchar thinking about the Sikh nation at all times (Chardhi Kala of the Sikh Nation). They would always be thinking about why Sikhs were straying away from Sikhi thinking - Have Sikhs forgot the Gurus actions that were for the benefit of us? He would discuss with learned Gursikhs – what strategy should be undertaken to ensure that the message of Sikhi can reach each and every household. They would perform their duties till 12am/1am and would wake up at 4am – this was their daily timetable. He used to say “God has blessed us with beautiful bodies he gives us good food and the greatest of all he has blessed us with birth into a Sikh household then if we get tired or lazy we do not have the right to live – as we should be dedicating each breath to Sikhi Parchar.”

They used to get happy and energised when more Katha was performed in the day whilst touring doing Parchar. They had that much love for Sikhi that they wanted all to take Amrit and become Sikhs he used to say what a great sight it would be if in all directions we would have the sight of Singhs. To get bookings of Sant Kartar Singh Jee was very hard as their was much demand for them. Sant Jee never refused anyone at Gurdwara Nabha Sahib they became very ill and the Singhs had to assist them up the stairs after which sangat from Chandigarh came at 10pm and said that there is a Divan taking place and the whole sangat is waiting for your presence – even if you attend and speak for only 10 minutes – the Singhs tried to convince Sant Jee not to go due to ill health but they still went to Chandigarh sector 19D and did Katha for 10 minutes with much fervour. When many people used to ask for their presence they used to say “Singhs we have no guarantees from our humanly bodies so we should do Sikhi Parchar to our hearts content – as much as is physically possible.”

He used to say that for Sikhi to flourish a Parcharaks lifestyle should be exemplary and disciplined. With regard to this they emphasised that each person who publicly speaks at the Gurdwara from the stage must be Amritdhari. He advised the committee of Sri Patna Sahib with regards to this and they issued an edict/Hukamnama stating this with which 36 Dhadi Jathas and many Parcharaks became Amritdahri. Delighted with this Sant Kartar Singh Jee gave saropas to these Parcharaks on 7th October 1976 AD at Bir Baba Budha Sahib Jee. 250000 peope had congregated Sant Jee narrated the history of Sri Guru Tegh Bahadar Jee and other Shaheeds and 5000 men out of the Sangat stood up and promised never to drink alcohol again or cut their hair. Whenever anyone used to ask for their presence at their home if they were Patit (not within Sikh Code of Conduct) cut their hair drank alocohol/take intoxicants – until the home owners would promise that they would give up drinking alcohol/taking intoxicants or stop cutting their hair – they would not go to their home or eat anything from them. In this way they put many onto the path of Sikhi.

Siri Guru Tegh Bahadurs Jee’s 300th Shaheedhi day was celebrated by Sant Jee by getting organisations Jathebandhis Colleges participate in Sikhi preaching. In relation to this during the emergency period of the government 37 great processions were carried out in various locations – the achievements of which are beyond description. The whole Sikh world was awakened by these great events. Sant Jee would stand for 15 hours at a time doing Parchar. A 100km long procession would go pass 60-70 villages and Sant Jee would do parchar for 10-15 minutes at each village. Each village’s Sangat was made to sing the following slogan:-

May my head be sacrificed but not my Sikhi ads. Sant Jee replied that the 2 ministers should be informed that the procession is being performed in memory and honour of the protector of the Hindus – Hind dee Chadar. The ministers should remove their shoes and stand with both hands folded and clear the road for the procession to pass. Sant Jee was asked to lay the foundation of Sri Guru Tegh Bahadur charitable hospital in Ludhiana when Sant Jee arrived their about 15-20 men got up in the Divan to welcome Snat Jee. Sant Jee walked out and left. The organisers went and asked the reason for this exit and Sant Jee replied that “in the presence of Sri Guru Granth Sahib Jee no-one should stand to welcome or respect another as this degrades the respect of the Guru.” All the organisers asked for forgiveness Sant Jee sent them all back into the Divan and Sant Jee went in by himself after all of them. Sant Jee explained to them that it doesn’t matter how famous the leader or great a Gursikh is – no-one is greater than the Sri Guru Granth Sahib Jee.

“First Rajput Kings used to give their daughters to get rewards. Today Sikhs are disgracing themselves if they do the same. For this reason no Sikh is to marry their daughter to a Mona or a patit and the rehatnama says:

Guru Gobind Singh Jee is saying that the Sikh that marry’s his daughter to a Sikh and does not take any money/dowry he is a true Sikh of mine and will reach my abode in Sachkand. Bhai Sahib Singh Rehatnama p.160

The second point that they clarified was that “We want to ask Indira Gandhi who achieved the rule of the Delhi government? If you have come here to prostrate to Sri Guru Tegh Bahadur you have done no great act. If Guru Jee had not become martyred the master of this throne would have been a Muslim and everywhere all would be greeted with Salema Lekham. You yourself would have been under a Burka.

The number of hairs that are on the body of the P.M. even if she was to cut her head off that many times and placed at the feet of Guru Jee she still would not be able to remove the debt owed to Sri Guru Tegh Bahaur Jee. Regardless of how powerful the P.M. – no-one is more powerful than our Guru. She should prostrate to our loved one the light of the 10 Kings - Sri Guru Granth Sahib Jee not that we get up and pay respect to her.” Upon this Jakaras were heard from all areas of the arena.

Due to the truth being spoken by Snat Kartar Singh Jee this led to disputes being raised by P.M. Indira Gandhi with the Damdami Taksal. If anyone disrespected Sri Guru Granth Sahib Jee they Sant Jee never tolerated it regardless of who they were. Thus they spoke up against the Nakali Nirankaris and did programmes to tackle their onslaught on Sikhi.

Sant Kartar Singh Jee was the Jathedar of Damdami Taksal for 8 years and did much Gurmat Parchar in this time. On 3 August 1977 AD they were travelling from V. Maleeha (n) (Jalandhar) to Solan and at the station Hussaainpur (near Ludhiana) their car crashed into a tree – where they were critically injured. They were taken to C.M.C. Hospital. They ascended to Sachkhand here on 16 August 1977. The Gurdwara Gurdarshan Parkash which they built in memory of Sant Gurbachan Singh Jee Khalsa at Mehta was where they were cremated on 21st August 1977. 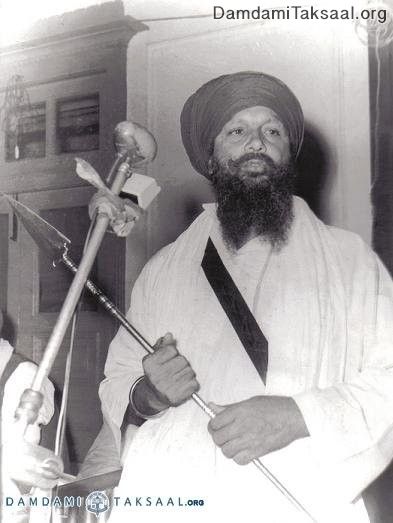 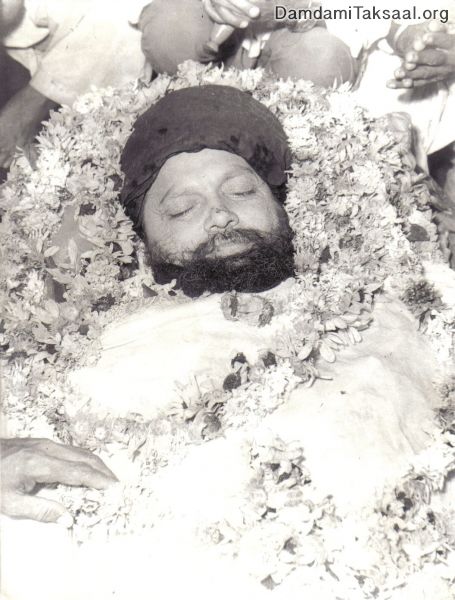