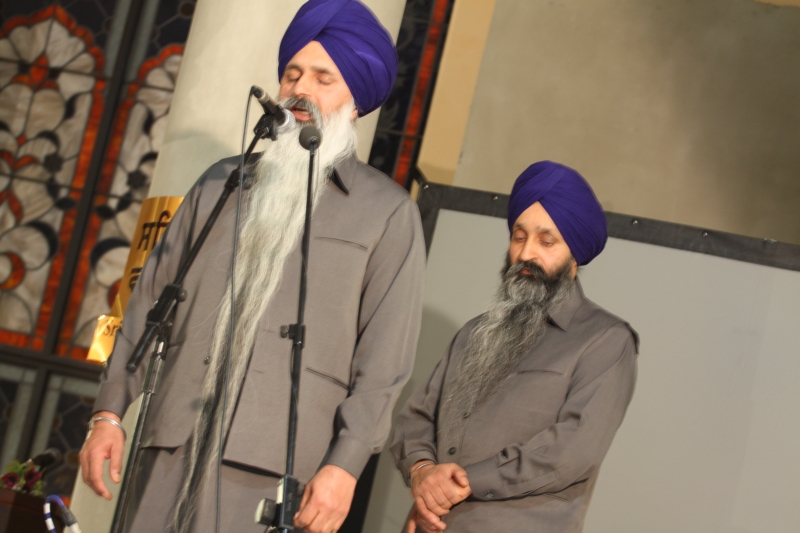 The ‘Jagowala Jatha’ comprises of two brothers, Bhai Satvinder Singh and Bhai Palwinder Singh from the native village Pattar Kalan situated in the Jalandhar district between Kapurthala and Kartarpur.

It was in June 1968 when Bhai Satvinder Singh first sang a kavita on stage dedicated to the Shaheedi of Bhai Taru Singh Ji. The following year in 1969 it was the 500th Avtar Purab of Sahib Sri Guru Nanak Dev Ji Maharaj, which was widely celebrated throughout the world. It was on this special Gurpurb that both brothers sang a kavita on the birth of Sri Guru Nanak Dev Ji at their local high school and won first prize. From this day a jatha was set up of 4 youths from the village consisting of Satvinder Singh, Palwinder Singh, Gurnam Singh and Jaswinder Singh. The jatha performed kavishri by singing praises of our Guru Sahib Ji and Sikh history.

In April 1978 the narkdhari cult opened fire killing 13 Singh’s and injuring a further 78 in the holy city of Amritsar. This massacre was a turning point for the jatha as they became enraged and started writing and singing praises of present day Shaheed Singh’s and began preaching about the oppression that Sikhs were faced with by the tyrannical central government of India.

On 9th September 1981 Lala Jagat Narain was assassinated for slandering Sahib Sri Guru Gobind Singh Ji Maharaj in his newspapers. Twelve days prior to this on 27th August 1981, Sant Baba Jarnail Singh Ji Khalsa Bhindranwale along with their jatha came to the village of Pattar Kalan. Listening to Sant Ji’s katha and lectures, gave the kavishri jatha further encouragement and inspiration to follow through with this noble path of kavishri and parchar for the nation. After Sant Baba Jarnail Singh Ji Khalsa Bhindranwale spent 25 days in jail and were acquitted in the Lala Jagat Narain assassination case due to a lack of evidence, they returned to village Pattar Kalan and nearby Kohala and Khaira Majha to carry on their tour of preaching throughout villages and cities across various states. Sant Bhindranwale touched the hearts of many youths and brought them back into Sikhi. Many fellow villagers who are now residing in various countries across the globe became true followers of Sant Bhindranwale.

On 19th July 1982 Sant Baba Jarnail Singh Ji Khalsa Bhindranwale declared a ‘Dharamyudh Morcha’ from Sri Akaal Takhat Sahib. By this time the struggle to break the chains of slavery had begun. Sant Ji declared Shaheed Bhai Amrik Singh Ji Khalsa the President of All India Sikh Students Federation (AISSF) and created units across the villages and cities taking parchar to the next level. Various dhadhi’s, kavishar’s and kirtani jatha’s all contributed and played a vital role in this cause. At the same time the bramanvadi government was planning and conspiring to further oppress Sikhs and keep them as slaves. As a result in June 1984 the Indian government desecrated Sri Akaal Takhat Sahib, also fired on Sri Harmandar Sahib and killed thousands of innocent Sikhs and worshippers whom were at the holy shrines praying at that time. Sant Bhindranwale always said that when the Indian forces enter the Harmandar Sahib complex the foundation stone for Khalistan would be laid and the fight for our own state would begin. By this time, all major kharku organisations such as Khalistan Commando Force, Bhindranwala Tiger Force and many more, all contributed and laid down their lives for Khalistan by carrying out assassinations on those responsible for oppressing Sikhs and those responsible for the 1984 attacks in Amritsar and Delhi amongst other parts of India.

The sacrifices of both Singh’s and Singhni’s in this struggle inspired many dhadhi’s and kavishar’s to write about events that had taken place. As we know Sahib Sri Guru Hargobind Sahib Ji created dhadhi’s and Sahib Sri Guru Gobind Singh Ji created kavishri to raise spirits of the Sikh nation, so it doesn’t fall into a slumber to the atrocities that are happening around them. Taking this concept into consideration Bhai Swaran Singh Jago’s jatha wrote the first version of ‘Jago’ in 1985 which was sung by Bhai Satvinder Singh and Bhai Palwinder Singh. At the time Bhai Randhir Singh from the UK, made a video of the 2 brothers singing and showed it to the panthic sevadars in the UK. After watching the video a sponsorship was sent from Sri Guru Arjan Dev Ji Gurdwara Sahib (Derby) inviting the jatha to come and sing kavishri vaaran in the UK. On 27th September 1986 the jatha of Bhai Satvinder Singh and Bhai Palwinder Singh arrived in the UK. Their first programme was held at the Gurdwara Sahib in Hitchin on 28th September. When listings of future programmes were given to the newspapers by Bhai Gurnam Singh Shoker of Derby, he gave the name as ‘Jagowala Jatha’ instead of the personal names. From this day onwards the kavishri jatha of Bhai Satvinder Singh and Bhai Palwinder Singh was known as the ‘Jagowala Jatha’ and have been respected and honoured by the Sikh nation worldwide.